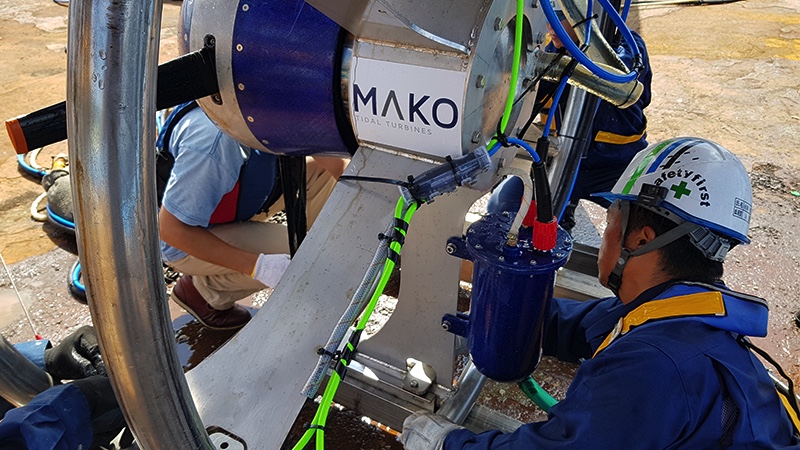 MAKO Tidal Turbines is one of AOEG’s founding technology members, having joined during our original formation as AMET. Since then, the company has provided continual support throughout our transition to AOEG.

Worldwide, millions of people are disadvantaged due to zero or limited access to reliable, cost-effective electricity. MAKO’s ultimate aim is to provide communities with the energy security much of the world takes for granted.

AOEG: What is tidal energy? How does it work?

Hunt: Tidal energy harnesses kinetic energy from free-flowing water to generate electricity. Tidal turbines operate on similar principles to wind turbines – though there are significant differences in design, fabrication and scale, due to water being 800 times denser than air. The principal advantage of tidal energy is that electricity production is 100% predictable, as tidal turbines below the water surface are unaffected by weather conditions above the water surface.

In regular tidal conditions, a tidal turbine will produce its rated output around 40% of the time. When located in flowing canals, channels and tailraces, a tidal turbine will produce rated power constantly. The benefit of constant flow is that power produced is baseload, and the cost of electricity comes down substantially. In fact, the amount of electricity generated from turbines in constantly flowing water is around 7 times greater than from solar panels.

Hunt: The MAKO is a new class of turbine, built from innovative design and engineering. Efficient, dependable, versatile, powerful and competitive, the MAKO proposes a predictable, cost-effective solution for Australia’s future energy mix.

The MAKO tidal turbine is designed to improve the energy mix at any site, by adding reliability, reducing carbon emissions and lowering costs. Designed as a software and hardware combination, the MAKO can be integrated into an existing grid. Working alongside solar PV and other renewables, the MAKO helps reduce the consumption of fossil fuels during periods when other renewables cannot operate – for example, in conditions of bad weather, heavy clouds or nightfall.

AOEG: Why will the MAKO succeed in the tidal energy industry? 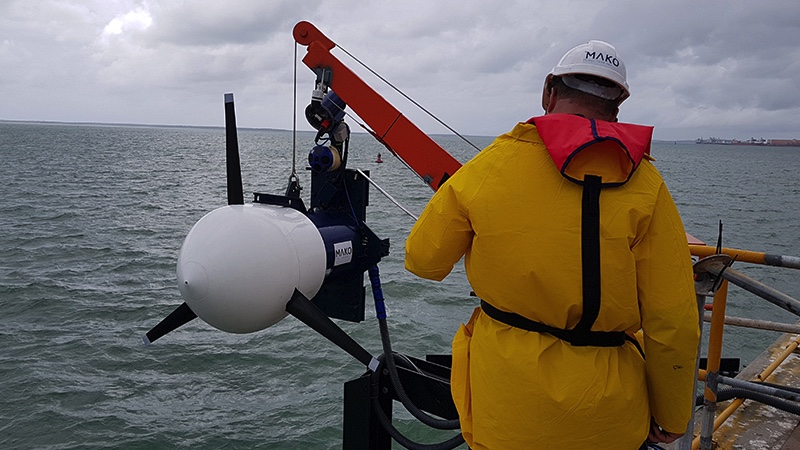 Hunt: The MAKO tidal turbine has been designed from engineering first principles to operate cost-effectively in the marine environment. Its unique, large-diameter central hub and smaller blades allow us to simplify internal components, while reducing fabrication and maintenance costs. The scale of the initial MAKO.7 model can be attached to existing marine structures (like pylons) or deployed (in tailraces or canals) – opening up a variety of significant energy production opportunities.

MAKO has followed the lead of the solar PV industry by producing low-cost, modular units that can be linked in arrays to provide as much power as required.

AOEG: What testing have you done on the MAKO to date?

Hunt: Following initial design and testing, the MAKO prototype was refined in close consultation with our launch customers, with many features and potential deployment scenarios coming directly out of this process. Due to the relatively low cost of each deployment, we have been able to install and demonstrate the MAKO in a range of different locations. This has provided not only validation of our technology, but also of our business model.

To demonstrate its commercial potential to a range of customers, the MAKO has already been deployed in a number of sites, including at a mooring in the Tamar River, Tasmania as a standalone tidal energy system, on a large industrial wharf in Queensland integrating with a grid, and in a constantly flowing Japanese current, as power generation for remote island communities.

MAKO is currently working on initial commercial installations, with a full system being sold to a utility company in Australia. Work is also underway with potential MAKO.7 customers in Australia, Japan and Singapore. 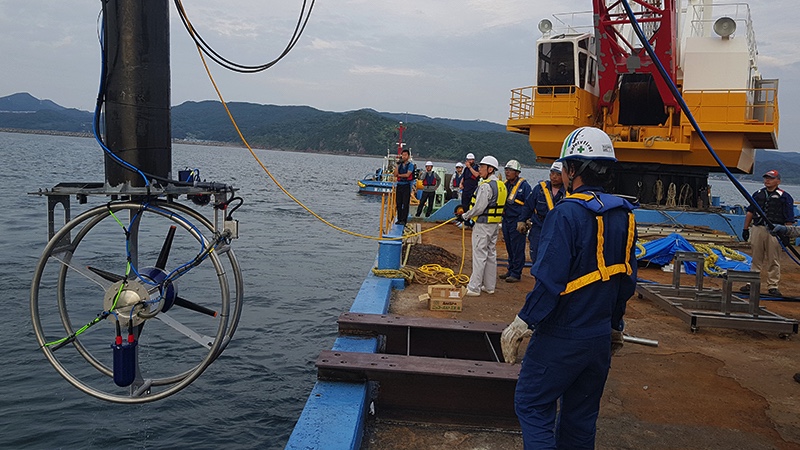 AOEG: What are your hopes for Australia’s tidal energy in future?

Hunt: Tidal energy’s predictability positions it as an ideal partner for energy storage systems, as they become more cost-effective. We see tidal energy becoming a part of the energy mix at coastal locations or wherever there is free-flowing water. Its predictability, high capacity factor and energy density offer many advantages – particularly when coupled with other renewables and energy storage.

MAKO will continue to undertake research and prototyping in Australia, as we see this as the best location to do so. The intellectual property and experience gained by MAKO – and by all those with whom we work – will remain in Australia, even if volume manufacturing occurs offshore.

Visit MAKO’s website to learn more about their Tidal Turbines’ role in improving the commercial viability of tidal energy technologies.